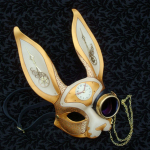 Hello. I'm Rabbitty. Lilly asked me to come, and it looks interesting. I'm a little self-conscious about being about this wiki; the other users here are the ones who's pages I look at to learn about coding. Adrienne is my Council character, and Tatenda and Garikai are my Optivus characters. Leah isn't really true neutral, she's neutral because she's not really capable of being anything else.

Adrienne Zoé C. Tremblay is the Canadian Council Representative. At 24, she is on the younger edge of acceptable, and sometimes airy and unfocused. She got in on the word of her absent father.

Leah Amalasuintha D. Somnium is the older of the two Somnium sisters. They don't really know what's wrong with her. She doesn't hear voices like her sister, or fear leaving the house, like her mother. But you're looking for someone who's crazy, with limited acknowledgment of your presence, she's your girl.

Tatenda M. Chipunza is the eldest of the 3 Chipunza siblings. When they found out the truth about why their parents had been killed when they were children, Tatenda took it upon her self to — not so much avenge then as finish her father's unfinished work as a member of the Optivus, and has spent the last 12 years doing precisely that.

Retrieved from "https://alter-ego-roleplay.fandom.com/wiki/User:Rabbitty?oldid=6764"
Community content is available under CC-BY-SA unless otherwise noted.