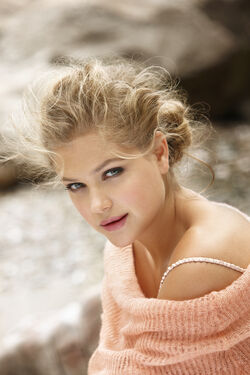 Frederika Gebhard was born in Ufa Russia to Kseniya Ninel and Helmut Gebhard on April 18th. She was raised by her father in Russia after her mother died of a brain aneurysm. Frederika was always bothered by the fact that it was something she hadn't known about her mother, and it kept her from taking the opportunity to cherish the time they had together.

Kseniya and her only daughter did not have the best relationship, Frederika is daddy's little girl. She has what is sometimes referred to as Daddy's Little Girl Syndrome, she has always had a much stronger bond with her father Helmut than her she had with her mother. Losing her mother did nothing to help the situation.

Helmut was never the most understanding man, and almost never said the right words. But, he was always there to hug Frederika when she needed it, or even be around when she didn't want to talk, and needed someone to just be there. The strength she was able to learn from her father encourage her seek a place with the Council.

Putting aside everything else, but occasionally finding time to валять дурака, Frederika was tutored following a very strict regimen of physiotherapy, language, politics, business strategy, and war tactics. The latter being something her father taught her himself. Helmut had been a Historian before he met Kseniya.

These lesson had a dramatic impact on young Frederika she is a very calculated in her actions. She finds the time for озорство but does not let a lack of it take control of her emotional or mental capabilities. If she were not human, she would be an ideal lifelike machine.
Frederika Gebhard
The name Frederika is a girl's name is a variant of Frederica (Old German), and the meaning of Frederika is "peaceful ruler".

The name Iseult is a variant of Isolde. The origins of this name are uncertain, though some Celtic roots have been suggested. It is possible that the name is ultimately Germanic, perhaps from a hypothetic name like Ishild, composed of the elements is "ice" and hild "battle".

Gebhard is a name derived from the Germanic element geb "gift" combined with hard "brave, hardy"

A bit of a loner, Frederika is feisty and flirty. She is very sassy but she can also be kind. More of an observer she doesn't care to be the center of attention or the life of the party but she will jump on a table and break in to a dance to liven things up if no else has the яйца to do it themselves.